With a B+, the Garden State receives the highest score in the U.S., an 87 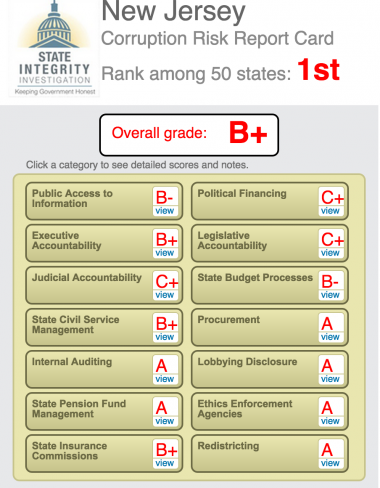 New Jersey, contrary to its national reputation, is not all concrete and blacktop; nor is the Garden State one giant, toxic waste dump; and the majority of its 8.8 million residents are not bed-hopping, scantily-clad, tough-talking beach bums.

And neither, then, is New Jersey the most corrupt state in the nation, according to the State Integrity Investigation, a collaboration of the Center for Public Integrity, Global Integrity and Public Radio International. In fact, the months-long probe ranks New Jersey ranks No. 1 for transparency and accountability in state government, with a grade of B+ and a numerical score of 87.

The ranking may seem counter-intuitive.

Yes, Gov. Chris Christie made his reputation by busting more than 100 public officials when he was a U.S. attorney in the state. And yes, at least five state legislators have been convicted of or pleaded guilty to official misconduct since 2004. And yes, others were investigated for lesser misdeeds or resigned before being charged.

There was also a string of costly procurement debacles involving the motor vehicle inspection program, implementation of a toll road payment system and state-funded school construction.

But thanks largely to these moral missteps and hard work by good-government groups and legislators, New Jersey now has some of the toughest ethics and anti-corruption laws in the nation. The Garden State ranks first in the integrity probe for ethics enforcement, first for executive branch accountability and fourth for procurement practices.

The strong ethics rules were signed into law at the end of the 2004-05 legislative session. They were, in part, a reaction to the abbreviated, scandal-plagued administration of Gov. Jim McGreevey. The Senate president, Richard Codey, stepped in to replace McGreevey as governor and signed a law overhauling ethics rules. It placed more public members on the State Ethics Commission in an effort to make the body more independent, required annual, mandatory ethics training for all employees and gave the commission the power to fine or demote those who violate the ethics code. It additionally gave the commission power to enforce anti-nepotism laws and prohibited executive branch employees from accepting any gifts from lobbyists.

Codey also signed a bill prohibiting campaign contributions by most firms doing business with the state. That codified an executive order by his predecessor, McGreevey.

“A significant amount of work has been done over the last 10 years,” said Heather Taylor, communications director for the Citizens Campaign, one of those good-government organizations. “The state ethics law is pretty comprehensive … It’s one of the best in the nation. At the state level, we’ve done pretty well.”

Yet, said Taylor, “There’s still a lot more work to be done.”

Despite the state’s high grade, watchdogs say state regulations could use an overhaul. Among some of the shortcomings:

“OPRA (the Open Public Records Act) is better than its predecessor, but nowhere near what it could be and should be,” said Margolin, co-author of “The Jersey Sting,” a book about one of the largest public corruption stings in state history.

To get the revised OPRA law passed a decade ago, supporters agreed to numerous, broad exemptions — like correspondence between legislators and constituents, for example.

There are other problems with transparency in state government, including the lack of a right to information not included in documents – in other words, simple answers to questions.

The state ranked sixth on access to information despite the reticence of some officials to supply it.

The Office of Legislative Services’ director of public information, Lori O’Mara-Van Driesen, refused to answer all but one question about the workings of the Legislature, the budget process and the OLS.

Christie’s office also declined to answer any questions about the executive branch, including numerous requests for more information about a helicopter ride he took to his son’s baseball game and, reportedly, back to the governor’s mansion to meet with presidential suitors from Iowa.

Two of Christie’s spokesmen did not answer repeated requests for information about the meeting and whether any state money was spent to entertain the visitors.

Margolin said that governors over the years have exempted more and more of their own activities from the public eye, using executive orders or just as a matter of course. He said former Gov. Jim McGreevey had refused to make the calendar of activities at Drumthwacket, the governor’s mansion, public, but after McGreevey left, theStar-Ledgerfound the mansion had been used for birthday parties, communions, weddings and Democratic fundraisers.

“There are no laws about this, but in practice it’s always been that these kinds of events that are not state business are supposed to be paid (for) by someone else, not the state,” Margolin said.

Christie’s office has refused to release details about his activities, including costs related to his political travel, citing security concerns.

The exemption for the governor’s records is only one part of a broader range of problems with the public records law now a decade old.

Critics complain that records custodians often take more than the legally allowed seven days to answer a request for information and then may give answers that are too vague. The process of appealing a denial to the Government Records Council, while free, takes far too long.

The council’s own statistics show that 60 percent of 262 cases opened in 2010 went unresolved by year’s end. Open records advocates like John Paff, who has filed several hundred information requests, said it takes as long as 18 months for the council to hear a case.

Many cases cannot be resolved because the council has only three sitting members, with two slots vacant, as of January 2012. One has been open since February of 2009. If a member can’t make a meeting or has a potential conflict of interest — representatives of the departments of education and community affairs are on the council — cases have to be postponed. The council cancelled two of its first nine monthly meetings in 2011 due to a lack of a quorum.

“They are slow,” Paff said. “They have a section on the agenda listing all the cases they can’t deal with. There are seats on the board that are not filled. They need appointees who would not be in conflict with cases.”

Dara Lownie, the Government Record Council’s spokeswoman, said the council “adjudicates complaints as expeditiously as possible.” Its three case managers handled 340 complaints in 2010, with most resolved through mediation before getting to the council level. Sometimes a case takes longer because of its complexity or because the parties are slow in filing all the necessary documentation.

“Because of this multi-part adjudication process, the GRC’s statistics may look like not many complaints are being closed as final, yet they are still being adjudicated,” Lownie said.

Records custodians who do not provide documents as required may do so without fear of penalty despite a law that allows for penalties against those who deny records. The custodian must have “knowingly and willfully” withheld the documents. The GRC has levied fines only five times in the last decade.

“The ‘knowing and willful’ standard is an extremely high legal standard,” said Lownie. “There must be significant documented evidence that proves the custodian or other employee was fully aware that their actions were in violation of OPRA, yet they chose to violate the law anyway.”

Taylor said average citizens have a tough time before the Government Records Council because they are representing themselves against lawyers arguing on behalf of state or local agencies.

“It’s stacked against citizens,” she said.

Some of New Jersey’s other laws involving documents are also lacking.

For instance, the disclosure requirements for activities by lobbyists make it difficult to match up lobbyists’ spending and the bills they are backing or opposing. The bill reports are filed quarterly but are not available on the New Jersey Election Law Enforcement Commission’s website. Lobbyists’ spending reports are filed only once a year, in February, and do not include the targeted legislation.

“The reports have to be timely,” said William Schluter, a former state senator who is vice chairman of the State Ethics Commission. “The (yearly spending sections) should be increased to quarterly.”

On the election side, New Jersey’s laws are strict in limiting contributions from individuals and committees, but it is easy to get around these caps by having multiple family members and employees make contributions.

“I fought the leadership PACs tooth and nail; it’s just a terrible provision,” said Schluter. “It changed the dynamic of legislative leadership in elections. It proves money buys results, and it does.”

The state’s financial disclosure requirements are a mixed bag.

Disclosure requirements for the executive branch are the strongest. They span 11 pages and include seven asset value classes, with the highest being $500,000 and over.

By comparison, the lawmakers’ forms are skimpy. They comprise only four pages and have only four value classes, the highest being $50,000 and over.

While both types of forms are online, reading through some of the legislators’ scrawls can be difficult.

Candidates have to file a separate form that is seven pages long but does not require the reporting of even ranges of income. Neither do the three-page forms judges have to file. Neither the candidates’ nor the judges’ forms are available online.

Margolin said everyone should be required to disclose precise data, including actual amounts, rather than ranges, particularly when those ranges — such as $50,000 or more — are meaningless.

Christie has called for strengthening disclosure and groups like the Citizens Campaign are seeking uniform disclosure rules regardless of the branch of government.

Many also have called for the regulation of issue advocacy organizations, which have been proliferating in New Jersey as a way to skirt election finance rules. These nonprofits do not have to disclose their donors but can spend money in support of, or against, an issue or candidate.

New Jersey has had experience with three such state-specific groups over the last two years.

The Center for a Better New Jersey, formed in 2009, was created by Republican minority leaders of the Senate and General Assembly, who were bracing for legislative redistricting. Reform Jersey Now — a group with ties to Christie — followed, raising more than $600,000 and spending an undisclosed amount to promote the governor’s agenda. Reform Jersey eventually caved to public pressure and released a list of its contributors, but Center for a Better New Jersey still has not.

Several Democratic strategists decided to get into the game in 2011 with One New Jersey.

Sen. Loretta Weinberg, D-Bergen, who called the Republicans’ groups “thinly-veiled attempts to get around campaign finance and transparency rules,” tried unsuccessfully to get the Democrats to disclose their donors.

“You have indicated that ONENJ (One New Jersey) is under no legal requirement, under current state or federal law, to report its contributors,”she wrote. “However, just because it’s legal, doesn’t always make it ethical or in the public interest … The decision not to disclose donors is completely wrong and should be immediately corrected.”

Weinberg is one of the Democratic sponsors of legislation that would require issue-advocacy groups to come clean about their donors and expenditures and prohibit candidates from creating them. Despite Democratic control of the Legislature, though, the bill has not received a hearing in either house.

With divided government, and often-times nasty rhetoric tossed about in Trenton, it’s unclear when, or whether, that bill, or other campaign and ethics reform measures, will pass.

Public is hungry for information on accountability and transparency