The sandhills of Nebraska. Shutterstock

Why Nebraska ranked 5th of 50 states 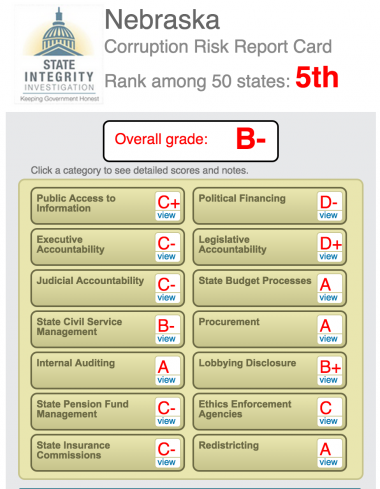 Lots of people in Nebraska began asking questions when a Canadian company, TransCanada, announced plans to build a 1,700-mile pipeline to connect oil fields in Alberta with refineries along the Gulf Coast.

The proposed pipeline generated opposition, in part because it was originally slated to go through porous soil and high water tables in Nebraska’s Sandhills region, which marks the northern boundary of the massive Ogallala Aquifer — a source of irrigation and drinking water across a wide swath of the central United States.

So last fall, a state senator arranged a meeting at a Lincoln hotel between staff members of all 49 lawmakers in Nebraska’s one-house Legislature and TransCanada officials so staffers could get information from the company to better answer the questions they were fielding from constituents.

The meeting was supposed to be closed to the press.

But it took just one call from a reporter to Speaker of the Legislature Mike Flood to get the meeting opened.

“That is a good example, right there” said JoAnne Young of the Lincoln Journal Star, of just how transparent state government is in the Cornhusker State.

But there are plenty of others.

In the nonpartisan Legislature, nearly every bill — even those that cause eyes to roll — gets a public hearing. And those that need more time get more time. During a 15-day special legislative session in November to deal with pipeline siting issues, for example, the Natural Resources Committee held some 25 hours of public hearings on two bills; more than 160 people — many of them ordinary citizens — testified. In the end, lawmakers passed the two measures, which were based, to large degree, on public input.

“At times, leaders lead, but other times, people lead. And I think on this issue, the people led,” Sen. Annette Dubas of Fullerton said when the bills were signed into law. “They never wavered in their call for action, and that expectation is why we are here today.”

And that’s pretty much how things work down at the statehouse in Lincoln — a process that’s reflected in the state’s lofty ratings from the State Integrity Investigation conducted by the Center for Public Integrity, Global Integrity and Public Radio International. Nebraska is ranked fifth out of the 50 states, with a grade of B- and a numerical score of 80.

Nebraska has deep populist roots. And the state’s 1.8 million people are largely conservative and spread across some 77,000 square miles of mostly farm and ranchland. Nebraskans by and large consider themselves down-to-earth folks who demand a common sense — and open — government.

All proposed bills are posted on the Legislature’s website within minutes of being introduced. Same with amendments. Committee hearings and floor debate are streamed live online. The state budget gets similar treatment; it’s released online in preliminary form every other year and updated as it is tweaked.

“Anything and everything you want to know about the budget is in there,” said Sen. Lavon Heidemann, chairman of the Appropriations Committee. “There is nothing hidden. Agency by agency. Program by program. Everything is black and white. And if you don’t understand, anybody in the state can call the [Legislature’s] Fiscal Office and they’ll walk you through it.”

And while the executive sessions of legislative committees — where much of the deal-making and compromise occurs — are closed to the public, the media is allowed in and has been since at least the 1960s.

“The fact that we are allowed into the executive sessions is huge,” Young said. Of course, she said, there are scores of informal gatherings of lawmakers “that we don’t know about or get to go to.”

A presumption of openness

Nebraska also has what are widely regarded as solid open-records and public-meetings laws.

“The presumption is everything is open unless there is something specific that says it’s not,” said Frank Daley, executive director of the state Accountability and Disclosure Commission. “That puts the burden on the government to show that something is exempt. And that works for the benefit… of the press and public.”

Nebraska’s judiciary is also widely regarded as transparent. The state just recently completed rolling out a system that gives citizens access to court cases and rulings online. Nebraska selects its judges according to the so-called Missouri Plan. The state has judicial nominating commissions to pick the Supreme Court judges, the Court of Appeals, state district courts and courts of limited jurisdiction.

Each nominating commission is made up of four attorneys picked by the Nebraska State Bar Association and four non-lawyers appointed by the governor. A Supreme Court judge serves as a non-voting chair of each commission. No more than two of the attorneys and two of the laymen can be members of the same political party.

When there is a judicial vacancy, the appropriate commission will have a public hearing to interview applicants and also may conduct private interviews. The commission in turn submits the names of at least two qualified candidates to the governor, who makes the final decision. Judges then stand for retention at the first general election following their appointment, then every four years after that.

Lincoln trial lawyer Vince Powers said the Missouri Plan takes most — but not all — of the politics out of the judiciary.

“It eliminates the campaigning,” he said. “The people who get their name passed along are qualified. It’s a good system. I can’t think of a better one.”

Daley’s Accountability and Disclosure Commission keeps a vigilant eye on public and elected officials’ financial disclosure reports and campaign finance reports. While there is no law requiring them to be audited. each gets a “desk review” by Daley’s staff.

That vigilance resulted in Democratic gubernatorial nominee Mark Lakers’ withdrawal from the race during the 2010 campaign. Daley’s staff noticed an inordinate number of what appeared to be speculative, rather than firm, pledges of donations in one of Lakers’ campaign finance reports and began looking into them. Then Daley’s office began fielding calls from individuals who said they were listed on Lakers’ report even though they had not pledged financial support.

“It just sort of snowballed from there,” Daley said.

Soon after, Attorney General Jon Bruning’ s office launched a probe, and Lakers withdrew from the race in July after the inaccurate campaign pledges — to the tune of $330,000 — were revealed. Lakers later pleaded guilty to misrepresenting financial pledges, a misdemeanor, and was fined $500. Bruning’s office said that 51 of 80 pledges from individuals or corporations Lakers had listed were bogus. Bruning said he would have pushed felony charges had Lakers not agreed to plead guilty.

There have been other scandals as well. In May 2010, state Auditor Mike Foley announced that Ben Johnson, the former president of Peru State College, used some $43,000 from a university account to pay personal bills. That included $2,500 for clothing; some $8,400 for food and meals; $5,800 for home supplies; and nearly $14,000 for airfare, motels and a cruise.

Foley said that Johnson, who left the small college in 2008, also didn’t reveal a felony conviction and misled college leaders about his previous employment when he applied for the Peru presidency. After Johnson left Peru State, it became public that he failed to disclose more than $450,000 in deferred compensation he received from the college’s private foundation. Johnson agreed to pay a $1,200 fine under a settlement with the Accountability and Disclosure Commission.

Johnson committed suicide a month before Foley’s report came out. He was also the subject of a criminal investigation by the Attorney General’s office.

On other fronts, Nebraska’s grades are mostly solid. Jack Gould, issues chair for the Nebraska chapter of the government watchdog group Common Cause, says the state’s campaign finance and disclosure laws, for instance, are “pretty good.”

“The senators have to disclose quite a bit,” Gould said. “The things we have trouble with are in the area of lobbying fundraisers.”

Senators are required to report contributions of more than $250.

What troubles Gould is the string of breakfasts held by lobbyists on behalf of lawmakers — especially during the legislative sessions.

“They charge $100 at door,” Gould said. “Right away, that’s under the disclosure limit.”

Gould estimates that some lawmakers are getting as much as $7,000 a pop just for eating breakfast in a room full of people.

“And we think people also come to these things with other checks under $250” that don’t have to be reported, Gould said. “It’s sort of invisible money. When they report it, they just report it as cash. They collect all of the money at the fundraiser as cash. There’s a problem with that.”

Gould also is concerned about a recent action by the Accountability and Disclosure Commission clearing the way for a group to collect private donations to cover some expenses for Republican Gov. Dave Heineman’s wife, Sally Ganem.

Heineman is allowed to use campaign funds to cover his wife’s expenses when she travels on official state business. But Heineman’s campaign cannot pay for her expenses when, for example, she does work or travels for the Spouses Leadership Committee for the National Governors Association, which she chairs.

The commission voted in August to approve an advisory opinion that said the so-called “Nebraska First Spouse’s Fund” is OK under state disclosure laws. The fund was the brainchild of Lincoln businessman Duane Acklie, a prominent Republican. He said he will cap donations at $2,000 and give a report on the fund once a year to the commission.

But Gould fears that the fund will be used by people and corporations to buy favor with Heineman.

“I think it stinks,” he said. “It’s taking a group of private individuals and allowing it to administer money to the governor’s wife. If these are legitimate expenses, they ought to use public money.”

Gould and others also are concerned that there is no preclusion on lawmakers and other elected officials who leave office from becoming lobbyists.

At least 16 former lawmakers — including four former speakers of the Legislature — are registered as lobbyists.

On the up side, said Daley of the disclosure commission, Nebraska has very few exceptions for who must register as a lobbyist and file spending reports.

“Unlike many states — where there are lots of exemptions to lobbying activity and people are engaged in lobbying without being required to register — we don’t have monetary thresholds” that define a lobbyist, Daley said. “If a person is engaged in lobbying activity, the person has to be registered, and both the lobbyists and principle have to file reports showing receipts and expenditures. And those are available to the press and public.”

While supporters say term limits help bring new blood and ideas to the legislature, opponents argue that forcing experienced lawmakers out of office gives more power to lobbyists and bureaucrats, who know the system better than newbie lawmakers.

“Every time you turn this (Legislature) over,” said Young of the Lincoln Journal Star, “there’s another group of senators who don’t really understand what transparency is.”