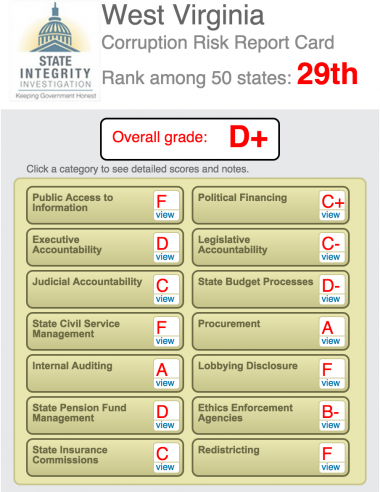 West Virginia has a rich history of corruption and an equally strong tradition of reform in the wake of scandal.

Old-timers chuckle fondly at the memory of a liquor lobbyist carting cases of free booze into the legislature’s conference room. Or at the campaign finance report that duly noted payments of $100 for driving voters to the polls, including one to a 14-year-old, who was too young even to have a driver’s license.

As a result, the state has an Ethics Act that bans nepotism in hiring; excessive gifts, excessive hospitality or soliciting gifts; and voting on issues that would line one’s own pocket. There is also an Ethics Commission to weigh complaints and a Commission on Special Investigations to ferret out procurement fraud.

These oversight mechanisms appear to be working, to an extent. West Virginia ranks 29th with a grade of D+ and a numerical score of 68 from the State Integrity Investigation, a collaborative project of the Center for Public Integrity, Global Integrity and Public Radio International. It should be noted that no state received an A.

Many of these reforms came as the result of the scandals that sent two West Virginia governors to federal prison in the past half-century. Gov. Arch Moore sparked change when he headed up the river on racketeering charges in 1990, as did former Gov. Wally Barron, who came up with a profitable pay-to-play scheme in the late 1960s that also landed him in the Big House.

The main problem is this state of 1.9 million people is that money talks, observes Derek Scarbro, executive director of the Democratic Party of West Virginia. Although corporations are forbidden by state law from contributing directly to candidates, political parties or political action committees, Scarbro says there are many ways around that prohibition. “Sometimes they issue position-paper advertising which doesn’t necessarily campaign for an individual, but as they explain an issue, they can convey a lot of negative information about a candidate,” he explains.

Or a corporate officer can simply give money away.

“That donation was supposedly Don Blankenship’s personal money being funneled through a a political action committee called And for the Sake of the Kids to support an obscure local lawyer running for the Supreme Court,” says Patrick McGinley, a law professor at West Virginia University.

“But where did Don Blankenship get that kind of money?” asks McGinley. “I think this kind of thing happens in virtually every state election.”

Later, Justice Benjamin refused to step away from cases involving Massey coal and tipped the balance in a 2008 majority decision to overturn a $50 million verdict against the coal company for fraud. That decision was appealed to the U.S. Supreme Court, which reversed it a year later, concluding: “There is a serious risk of actual bias—based on objective and reasonable perceptions—when a person with a personal stake in a particular case had a significant and disproportionate influence in placing the judge on the case by raising funds or directing the judge’s election campaign when the case was pending or imminent.”

In 2006, Blankenship took electioneering to a new level.

He spent nearly $7 million of his own money on the election, says Scarbro. “He just ran his own ads, did his own direct mail pieces, hired his own staff and ran his own campaign, almost like it was his own political party.”

Blankenship targeted 42 legislative races, trying to win the legislature for the Republican Party, but it backfired and Democrats ended up gaining six Republican seats that year. “When voters understood who was behind the money, it became a liability to Republicans,” says Scarbro.

Dough isn’t easy to come by for many West Virginians. While the energy crisis has benefitted the coal-producing state, median family income of $$38,380 still lagged behind the national average of $51,914 in 2010, according to the U.S. Census Bureau, and 17.4 percent of the state’s population lived in poverty. The median value of a home in the state was $94,500, about half the national average of $188,400. The Supreme Court’s 2010 Citizens United decision has complicated matters in a state historically vulnerable to outside money. Now private and corporate dollars can be funneled into races more easily than ever and much of that largesse flows through the national governors associations.

A week before the October 2011 special election for West Virginia governor, spending reports filed with the Secretary of State’s Office showed that the electioneering arms of the national Republican and Democratic governors associations had spent more than $5 million in the race — nearly double what the two major party candidates spent on their own campaigns.

“Anyone can spend his own money on an election,” says Scarbro. “The Supreme Court ruled that money is speech and can’t be abridged.”

There’s a second problem in West Virginia that also seems to defy solution: In a system of constitutional checks and balances, any lack of a check creates its own imbalance.

The attorney general has no authority for criminal prosecution, Warfield adds. And in practice, county attorneys have little interest either. “And in cases involving their own county, they may have conflicts of interest.”

With state troopers acting as his bodyguards, a governor’s power is practically unchecked.

“I honestly don’t know whether a governor could be prosecuted,” says Tom Miller, who has been writing a weekly statewide political column, “Under the Dome,” continuously since 1974.

“If he were to shoot his wife, I assume he’d be arrested and charged with murder,” Miller adds, “but I can’t think of any time in which the Kanawha County prosecutor has charged a governor with anything.”

A classic case involved former Gov. Arch Moore who went down to his buddy’s new car dealership and asked if he could take an Oldsmobile 98 Regency out for a test drive. He took the car back to the Governor’s Mansion — and kept it for four years.

It’s an open question of whether the car dealer felt powerless or whether he just didn’t want to rock the gravy boat. During the four years the governor was test-driving the vehicle, the dealership won contracts to sell the state $2.9 million worth of cars. And two weeks before Moore left office, it was awarded an additional $2.7 million contract for 200 new police cruisers, a contract voided after Gov. Gaston Caperton replaced Moore in 1989.

Not coincidentally, that’s also the year that the state Ethics Act was passed. Over the years, it has been tweaked and strengthened as needed. In 2005, reporting restrictions on lobbyists were tightened. Instead of only reporting gifts of $25 or more, lobbyists were required to account for everything that they gave state officials or legislators, a provision referred to as “first-dollar reporting.”

End of the open bar

“One major change has been the open bar at the Marriott,” says Phil Kabler, veteran statehouse correspondent for the Charleston Gazette.

Six or eight lobbyists used to chip in and maintain an open bar for legislators. They had plausible deniability because no one knew who drank more than $25 worth of free booze. But after the ‘first-dollar reporting’ law was enacted, it ended the oasis at the Marriott. It also substantially cut down on expensive dinners, Kabler added, since both lobbyists and legislators are aware that such dinners will have to be reported.

Another reform strengthened the “revolving door” provision of the Ethics Act. As passed in 1989, the law barred public officials, attorneys and accountants from appearing before their former agencies for six months to support or oppose proposed rules or to influence the issuance of licenses/permits, rate-making proceedings, contested cases, or the expenditure of public funds. But it said nothing about legislators or former high-ranking executive branch officials. The ban was extended to one year in 2005.

The 2011 amendment prohibits legislators and other high-ranking public officials from registering as lobbyists for one year. That change was sparked by the actions of Larry Puccio, current chair of the state Democratic Party, who resigned a few years ago as the governor’s chief of staff and immediately signed on to become a lobbyist for gambling, health care and energy interests, according to Theresa Kirk, executive director of the state Ethics Commission. As a result, Kirk says, the legislature, working with the Ethics Commission, closed that loophole.

Since 1989, all West Virginia public officials have been required to file a form disclosing their personal assets. In July 2011, however, the Ethics Act was also amended to require that spouses of public officials must also disclose their assets.

“There’s a bill just about every session to make politics more transparent, and it usually fails,” says Miller. “They tried for years to include spouses in the asset disclosure forms and finally won, but it was like pulling teeth.”

In a series of hard-hitting investigative stories in 1967-68, the Charleston Gazette charged that former Gov. Wally Barron and five of his buddies had set up dummy corporations in Ohio and in Florida, then told prospective state vendors to pay these corporations for “help” in securing state contracts. Then they rigged the bidding process to reward these suppliers with contracts and divided the money equally among themselves.

Dave Tincher, director of the state’s Purchasing Division, says the scandal sparked the creation of a special unit of the state legislature, which was set up specifically to ferret out “pay-to-play” schemes. “This is a team of former state troopers, mostly, who keep their eyes on public procurement,” he says.

Thomas F. Stafford, the Gazette’s investigative editor, broke the story. According to his book, Afflicting the Comfortable, the legislature established the Purchasing Practices and Procedures Commission (PPPC) in 1970, and it brought 107 indictments against 32 individuals and 11 corporations on charges of bribery and conspiracy involving state purchasing practices. The PPPC later evolved into the current Commission on Special Investigations.

Gary Slater, director of the Commission, remembers a recent investigation into orkForce West Virginia, a division of the state Department of Commerce. An employee in charge of handling grant monies guided about $100,000 to a company that had hired her son.

The state Ethics Act prohibits public officials from voting on issues in which they have special interests. It prohibits nepotism, or the hiring of members of their immediate family. But it’s silent about cronyism — giving jobs to your friends.

That issue came to public attention in 2007 when Mike Garrison, a young attorney just 11 years out of law school, was appointed to become president of West Virginia University.

The school’s faculty senate had voted no-confidence in the appointment of Garrison, a family friend of then-Gov. Joe Manchin who had worked as a lobbyist for a company that employed the governor’s daughter, Heather Bresch, in an executive position. The Pittsburgh Post-Gazette noted concerns about his lack of academic experience and the appearance of cronyism.

The following year, Garrison resigned following an uproar over WVU’s granting Bresch an MBA degree without requiring her to take the appropriate courses. Unlike other cases, the scandal did not lead to reform.